Healthcare providers and historians alike are all too familiar with the images and inconveniences of the large, bulky X-ray machines of the past. Since X-rays were first discovered in 1895, the equipment has evolved as advancements were made into digital radiography (DR) and computerized imaging. Until recently, however, it seemed to many that any changes were simply new features on an old machine.

Today, mobile digital radiography has come of age. Medical imaging innovations are redefining and reinventing portable X-ray technology for hospitals such as St. Elizabeth’s Medical Center in Boston, where it has put Samsung’s new GM85 mobile DR system into use. The 267-bed community hospital is part of the Steward Health Care System, the largest private hospital operator in the U.S. It began working with the GM85 in 2017, and after just six months the radiology team spoke positively of the system’s advancements. “This new equipment has taken the portable unit to the next level with its design, functionality, and image quality and radiation dose reduction,” said Robert Maheu, RT (R)(CT), director of cardiovascular medicine, radiology, and radiation therapy at St. Elizabeth’s Medical Center. The mobile digital X-ray machine received 510(k) clearance from the U.S. Food and Drug Administration (FDA) for the U.S. market in November 2016 after first being unveiled a month earlier at the 19th World Congress of International Society of Radiographers and Radiological Technologists in Seoul. Design, functionality, image quality and dose reduction are several of the benefits offered for hospitals, clinicians, and patients.

Maheu said Samsung’s GM85 is designed with the technologist in mind, identifying ease of use and image capture as its strongest features. “The radiologists and technologists have been impressed by the image quality [with] what they are now able to visualize, and being able to do so with a lower rate of exposure,” he said.

The machine’s small footprint and ergonomic design have made the X-ray process fast and efficient, which was not always the case. The previous process was to move the portable into place, place the computed radiography (CR) cassette under or behind the patient, take an exposure, remove the cassette, pull the portable out of the way, walk to the nearest CR reader, download and then finally review the image. If the image was of diagnostic quality, the exam would essentially be considered complete. If the image was not, the process would need to start over.

“We’ve found the new Samsung system narrows the process from eight steps to three, and the timesavings to be both a patient satisfier and a staff satisfier,” said Maheu. “We can approximate a 50 percent timesavings. Since our technologists do not have to take the cassette and walk to the CR reader, based on logistics, we know we are cutting out half of the process. Finishing the portables faster allows the tech to work on other assignments.” Where functionality is concerned, he said, “the machine itself has built-in efficiencies, improving workflow. From an RT perspective, its ease of use and design bring great functionality.”

Technologists are also able to pull the patient’s information from the work list provided on the control panel, which is imported wirelessly to the hospital’s picture archiving and communication system (PACS), eliminating the potential for manual input errors. The advent of iterative reconstruction in imaging has made a huge impact for Maheu’s department as well, giving them the ability to provide physicians with additional detailed images without actually taking another X-ray and exposing the patient to radiation (see Figure 1). 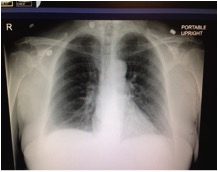 In addition to image capture, multi-touch functions allow technologists to control and adjust images easily and intuitively, saving time and allowing for more images to be taken in a day. Controls in the tube head unit (THU) allow techs to easily move the unit, with a monitor available to view captured images. The collapsible THU does away with the blind spot the fixed column created in the past, and it offers an advantage for maneuvering around stretchers, beds, and staff, whether in an emergency room, critical care unit, operating room or inpatient room.

The GM85 also boasts improved battery management, with fast charging times and all-day operation enabled. With only one cassette, the technologist is able to obtain X-rays from multiple patients in succession, review quickly to confirm a diagnostic quality image, send the image wirelessly to the PACS and move on to the next patient.

Additional notable features include: S-Align, which provides precise alignment for superior imaging, as the angle of the detector is displayed on the THU to enhance image quality. A tube and line enhancement (TLE) function improves clarity of the images with a single onscreen click. “If you happen to be at the THU, you have the ability to see the image from there and don’t have to return to the console,” said Maheu. For line placement, he added, it is important to see PICC (peripherally inserted central catheter) lines or tubes — in the lung, for example. Further, a source-image distance (SID) guide supports multiple SID settings to aid in precise device positioning. Samsung’s imaging engine, S-Vue, delivers dependable and accurate diagnoses through advanced processing and adaptive filtering, providing enhanced image contrast and sharpness.

The new technology also brought about X-ray dose reduction for radiologists and patients at St. Elizabeth’s. According to Maheu, all of the portables at the hospital were evaluated by a physicist who provided examples demonstrating the dose reduction at various levels of peak kilovoltage (kVp). “On average, between the kVp range from 150 to 200, our radiation physicists saw about a 30 percent reduction in radiation with the Samsung GM85,” stated Maheu.

by Page Mori
by XRVHealthcare